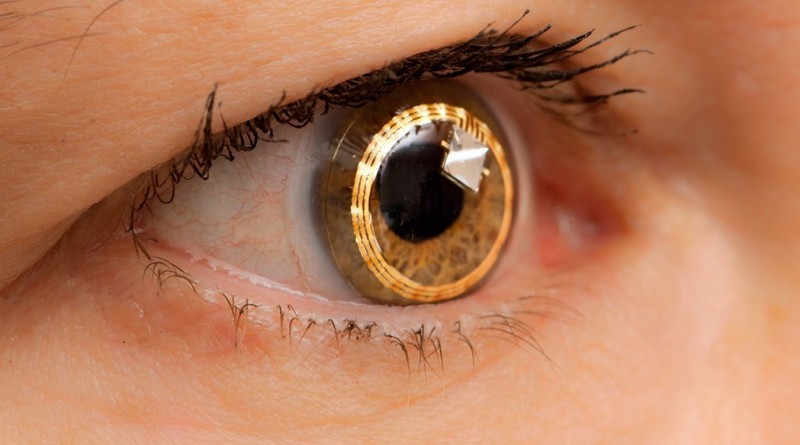 During the past decade scientists have been experimenting with smart lenses development. The scope of their application may be very different. Just like Google’s smart glasses (Google Glass), they provide robust augmented reality (AR) capability, navigation, quick access to information and computer games.

In mid-January, Google X, Google’s scientific unit, presented smart contact lenses for patients with diabetes. This device measures the glucose level in tear with the help of a wireless microchip and a tiny sensor.

So far, they developed a prototype. If mass production is successful, the device will make life easier for millions of diabetics: this disease requires blood sugar level analysis to be carried out several times a day.

The world’s first solution on microcomputer embedding into a contact lens was developed by Californian researchers in 2008. They managed to create a flexible silver “print-board” that worked as a pressure sensor. In such a way, a lens could diagnose glaucoma, since this disease is characterized by elevated intraocular pressure. Diagnosis at this point can be determined at an early stage and thus it prevents visual loop and blindness.

In 2010, the Swiss microtechnology company Sensimed presented Triggerfish – contact lenses with an embedded sensor for glaucoma diagnostics. In 2011, it was licensed for mass market sales in the European Union.

This device cannot be regarded as a mass product yet. Firstly, it is very expensive. Full set is retailed for almost 8,000 EUR. Secondly, it is very unhandy and is not ideal for everyday use. The set includes the lenses themselves, an antenna attached around the eyes with special skin-color material to receive the sensor data, a portable receiver attached to patient’s body and a cable transmitting data from the antenna to the receiver. The data can be downloaded to someone’s computer via Bluetooth.

Triggerfish has already spent 3 years waiting for being granted a license to sell the device in the United States.

In 2012, Belgian scientists created a flexible micro LCD display that can be embedded into a contact lens and fully follow its shape.

The first lens-display had just one pixel with a dollar sign on it. In the same way, a shading to protect eyes and especially damaged retina or iris from bright light can be used.

Such lense wearers can set brightness mode on and off instead of putting sunglasses on and off each time they need. This can be performed automatically using a built-in light sensor.

So far all this is still in development and has a long way to mass consumer. Scientists experience a wealth of difficulties trying to create lenses with a built-in computer not harmful to eyes.

First of all, it is difficult to make a display or chip flexible. Secondly, experimental lenses are made of polyethylene terephthalate, which does not provide the airflow to the cornea. Scientists need to find a material that would be able to both host a minicomputer and “breathe”.

Moreover, there is a problem with power supply. Now most of devices are powered by wireless battery. In this case, the battery must be attached around the eyes, which makes the device less user friendly. Scientists plan to develop a tiny built-in power supply. There are also plans to use solar energy to charge smart lenses.

Another issue is the display that makes the lens less flexible and more opaque. To escape eyes irritation, device materials must provide electrical conductivity and at the same time be quite soft and transparent as well as flexible and strong enough to avoid melting when applied or at high temperature exposure.