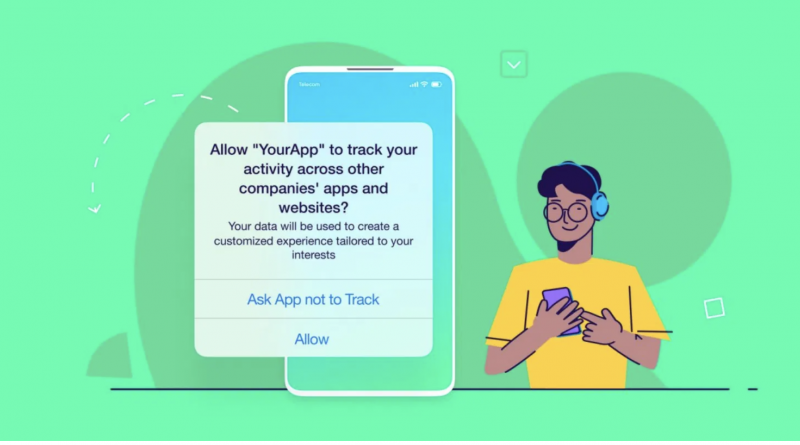 Initial data shows that the percentage of ATT agreement is much higher than expected – around 41%.

When Apple first announced the introduction of a consent mechanism within the AppTrackingTransparency (ATT) framework on iOS 14, the entire mobile app industry was faced with a new reality in which users would have to give apps their permission to use Apple IDFA for various purposes such as attribution, ad targeting, and more.

Initially, there were concerns that mobile apps would no longer be able to properly measure and optimize their campaigns on iOS. This view has changed over time as the industry developed new solutions and workarounds to adapt to the age of privacy and enable measurement. But one conviction remained: IDFA would subsequently fade into the background. Numerous estimates of ATT agreement percentages emerged, ranging from 2% to 20%, with the majority leaning towards the bottom.

Since privacy is central to public perception, it was assumed that very few users would give consent to have their data tracked, especially given the wording Apple uses in the system message. Of course, this assumption is absolutely logical. But what will be the ATT consensus percentage in reality? This is the million dollar question, or rather the billion dollar question. And we have some answers for you, based on researching millions of interactions across hundreds of apps.

Why you shouldn’t count out IDFA just yet

In April 2021, with ATT just around the corner, the acceptance rate is much higher than previously thought: 41% overall (weighted average) and 28% on average per app (where each app has the same weight regardless of size, for excluding statistical outliers). This is good news both for marketers looking to optimize their campaigns as much as possible and for end users who prefer a more personalized experience and have given their clear consent to do so.

These are preliminary findings from nearly 300 applications, and these early adopters do not necessarily represent industry trends. The numbers may change after the introduction of ATT. But we are confident that the results obtained in this sample are already encouraging.

Overall, over the past three weeks, we have recorded 5,495,084 times when users saw a system message and allowed tracking, and 7,765,740 times when tracking was rejected.

Here’s a breakdown by categories.

What is most striking about this data is the gap between non-gaming and gaming applications (41% vs 30%). It seems that fewer established brands show much lower acceptance rates. In the gaming realm, users often try new games without paying much attention to the brand behind them, and they take caution in any message requesting tracking permissions.

On the other hand, there are popular brands behind many non-gaming apps that are well-known to users. The higher the level of trust in the brand, the higher the percentage of agreement.

What about LAT users?

It should be noted that the percentage of agreement is not exactly the percentage of users with IDFA, but rather the actual level of IDFA. This is because there is also a “Restricted” status (under-age end users or confidential devices). Currently, this group, which cannot have an IDFA, is about 13%, and it will be interesting to see how this number changes in the future.

Besides, if it weren’t for Limited Ad Tracking (LAT), the numbers could be even higher. We calculated the percentage of agreement using the formula:

But “Denied” also includes users who have enabled LAT in previous versions of iOS. These users are not shown an ATT request when upgrading the OS, and they are automatically set to “Denied” or “Restricted” status. However, the ATT data is not limited to these two groups.

This means that 41% is actually a minimum and can only increase (within the original data sample, not after the implementation that contains more unknowns). How so? If you remove LAT from the equation, the denominator will decrease, as will the total digit, as shown in the following example:

How to optimize consent percentage

Here’s what you can do:

Timing: optimal timing of the system message is a key success factor. For example, if you show a query after the user has developed brand trust and value for your product, the chances of consent increase compared to showing the query the first time the app is launched.

Custom text describing the purpose of the request: you can edit the text in small print to explain as clearly as possible why you want to get the user’s IDFA.

Show a native message before ATT request: we strongly recommend using the ATT call after your dialog box. You can customize the design and timing of your native dialog box and ultimately show users the need to pass the IDFA by explaining that:

For example, here’s a native Facebook message that they are currently testing on iOS 14:

Whatever optimization method you use, do not encourage users to provide consent with discounts or promotions, as this is against Apple’s terms.