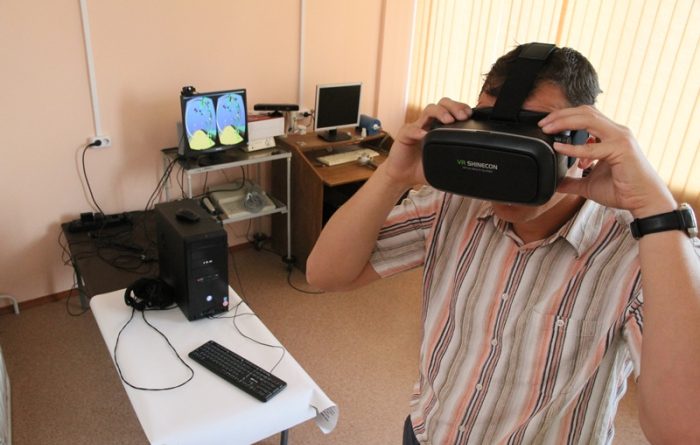 Scientists from Tomsk Polytechnic University cooperated with their colleagues from Siberian State Medicine University are developing a diagnostic system of neurodegenerative diseases at their early stages. The system will be able to diagnose such diseases as disseminated sclerosis, Parkinson’s disease etc. The diagnostic method is based on virtual reality technologies. A person is immersed into virtual reality; there he or she undergoes different neurological tests. Meanwhile researchers change VR characteristics and observe changes in a person’s movements. Scientists plan to finish the technical part of the project by 2017.

The diagnostic system of neurodegenerative diseases is a shared project of engineers and scientists from Siberian State Medicine University. In total eight people are engaged in the project, they are scientists, postgraduate students and students of higher education establishments.

“Many different physiological systems are responsible for our sense of balance. The vestibular system includes internal ear and semicircular canals; it helps us to determine our place in the space and the direction of the power of gravity. Muscular system and eyesight also help to orientate ourselves in space; for instance, we constantly trace the skyline and if we close our eyes at a marry-go-round, we may feel dizzy, as we will not be able to see the skyline. The whole coherent system works automatically, we do not do it intentionally, it works on its own subconsciously. However, if there are some failures in the system, a person may have such neurodegenerative diseases as Parkinson’s disease”, says an assistant professor of the department of commercial medicine and electronics in Tomsk Polytechnic University, Ivan Tolmachev.

Parkinson’s disease, Alzheimer’s disease, disseminated sclerosis are neurodegenerative diseases. These disorders of nervous system as a rule develop slowly during the lifetime, some of them are hereditary. One main feature for all of them is progressive nervous cells’ death, that is called regeneration.  It can lead to different neurological symptoms, first of all, movement disorders.

According to the scientists, in case of Parkinson’s disease the process of cells death can start at the age of 30, but the symptoms may become evident only in 50.

That’s why scientists all over the world are seeking for efficient and accessible methods to diagnose neurodegenerative diseases at their early stages.

“A man will only feel some lack of function when he has already lost 80% of all cells responsible for it. But then a person will have no chances of recovery. That is why it is really important to diagnose the illness at early stages when it possible to do something. Nowadays doctors have already made a step forward using special tests to detect neurodegenerative diseases, but in general they are based on visual assessment of patient’s condition, that are not always accurate enough. There is a lack of equipment diagnostics which can provide more accurate results. For instance, if a patient needs a highly sensitive diagnostics, he will have to get appointment card to the nearest center of positron emission tomography in Yekaterinburg. This is a highly effective method but generally patients come to specialized centers only when they already have symptoms of the disease”, mentions Ivan Tolmachev.

The system developed by scientists of Tomsk Polytechnic University and Siberian State Medicine University consists of VR glasses, a contactless motion sensor and a portable platform.

Researchers use equipment that is already available at the market such as Google VR glasses and contactless sensitive controller Kinect. The procedure of diagnostics takes place in the following way: a person puts on glasses and gets immersed into VR, when the surroundings change its angle of inclination. At the same time, a motion sensor detects the changes of human body position in 20 points. A person without any movement disorders easily adapts and changes its body position, while a person with disorders will lose it balance.

“We use the device presented in the market as they have all necessary function, so it is useless to devise anything else. Our task was to integrate all the devices, develop an accurate apparatus for data analysis; here we used a method of integral marks.  Also we created a human model, detected 20 the most important points that were analyzed by Kinect. After the procedure we receive results for all the points”, explains a young scientist David Hachaturian that also take part in the system development.

About 50 volunteers have already tried the system.

“During the experiment we checked how VR affects people. The whole procedure lasts for about 10 minutes. Both healthy people and patients with disorders took part in the experiment. At present stage of the experiment we can not say whether a person is ill or healthy, we cannot determine a diagnosis. But even now we can say how his present condition is different from a healthy person. We also came to a conclusion that people with different disorders react to VR in a different way. For instance, people with Parkinson’s disease often have hand tremor of the side that was more affected by the disease”, says Ivan Tolmachev.

According to him, researchers’ team will have to work for about a year to finish a technical part of the project. Then the system will have to go through different clinical testing and gain all necessary technological and toxicological certification.

“It is the very beginning and we cannot assess the costs needed for the project. But in any case the price will be much lower than different foreign analogues. Scientists hope that in the long run they will be able to use the system not only for diagnostics but also for patients’ rehabilitation”, adds a scientist.