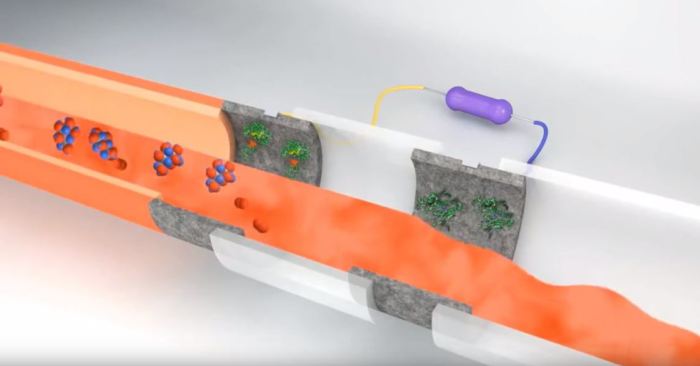 A team of scientists from Malmö University in Sweden and Kurchatovsk institute carried out an astonishing experiment: they tested a fuel element able to generate electricity from a blood flow.

According to hitech.newsru.com, the device, which power capacity was enough to supply a small electronic paper display with electricity, consists of two graphitic tube electrodes through which blood actually circulates. Each electrode is responsible for specific chemical reactions.

The first electrode is responsible for glucose combustion with hydrogen ions liberation; the second electrode is responsible for recovering the oxygen from blood. As a result of this chemical reaction, four molecules of hydrogen and one molecule oxygen form 2 water molecules, thus causing electrical tension to appear on the electrodes. Protein-clinging enzymes are applied on the surface of the electrodes beforehand to speed up the described above reactions.

In the course of the experiment, a catheter was inserted into a median cubital vein of a volunteer. One end of the catheter contained a fuel element. The blood of the testee flowed into a special jar, while scientists were measuring the voltage and the current generated by a fuel element. Not very big e-ink display was also connected to the element.

The power measured in the course of the experiment was only 0,74 microwatt, and voltage was not much bigger of some tenths of a volt, but these small indexes were enough to change the picture on the display.

However, scientists emphasized that before such experiments were carried out only “in vitro” and it was impossible to take into account blood viscosity, speed of its flow and many other factors that are important in human blood circulatory system.