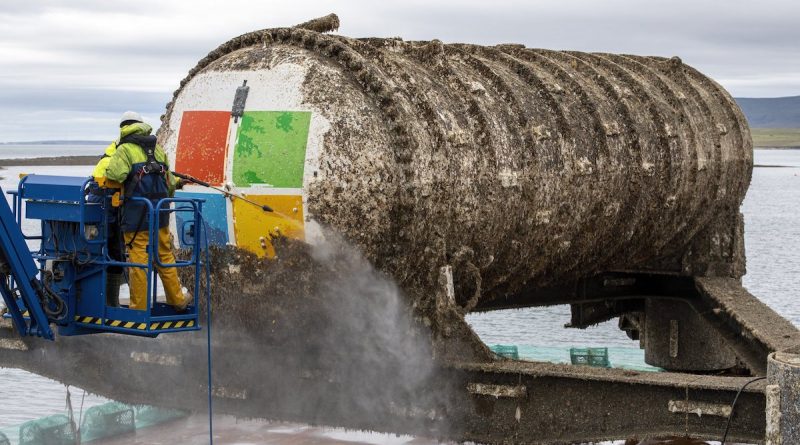 In 2018, the company lowered an airtight container with servers to the seabed in Scotland.

The Microsoft Project Natick team lowered the sealed container with servers to the seabed in Scotland to a depth of almost 36 meters. For two years, the team has tested the data center, monitored its performance and server reliability.

Natick aimed to prove that a sealed container at the bottom of the ocean could improve the reliability of data centers. On land, the surface of a data center is prone to oxygen-induced corrosion, humidity, temperature fluctuations, and accidental collisions with people repairing broken components. All of these affected badly data center operations. The experiment confirmed the hypothesis, according to a recent Microsoft statement.

In an underwater data center, the company recorded only 1/8 of refusals from indicators of centers on land. The constant coolness at the depth of the sea makes it possible to create energy-efficient data centers, the company added.

The company has been exploring the idea of ​​submarine servers since 2015, when it submerged a data center off the coast of California for several months.

Lessons learned from Project Natick are already providing information on how to make data centers more energy resilient, researchers say. For example, the Project Natick team chose the Orkney Islands to deploy to the Northern Islands in part because their grid is 100% wind and solar-powered, as well as experimental green energy technologies being developed at the European Marine Energy Center.

“We have been able to run really well on what most land-based datacenters consider an unreliable grid. We are hopeful that we can look at our findings and say maybe we don’t need to have quite as much infrastructure focused on power and reliability,” says Spencer Fowers, a principal member of technical staff for Microsoft Special Projects.

Other benefits associated with sustainability can include eliminating the need for spare parts. In a disaster data center, all servers are replaced approximately every five years. The high reliability of the servers means that the few that fail early are simply turned off.

In addition, Project Natick has shown that data centers can be operated and kept cool without using fresh water resources that are vital to humans, agriculture and wildlife.