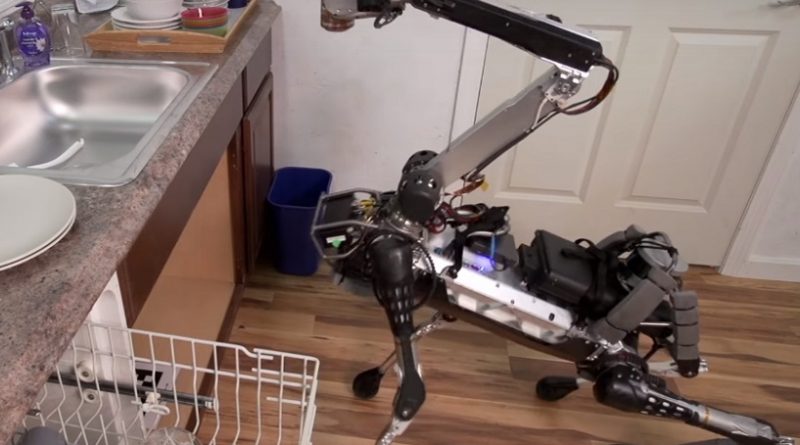 Robot developer Boston Dynamics owned by holding company Google, is famous for its scary videos about robots. It seems that developers decided to destroy such prejudices and presented a video clip about a new robot SpotMini that looks and behaves itself rather funny. The developers even stuck eyes to the robot’s hand that made it very similar to a dinosaur.

A new robot is a smaller and modernized version of Spot, presented in the end of last year. The developers outfitted the robot with a retractable arm able to fulfill many functions not only to stand people’s kicks.

The company presented a robot in home cozy atmosphere maybe to destroy some scary previous associations connected with SpotMini . SpotMini can even help to do your household chores: it can drop the litter into a litterbin or pick up and put dirty glasses into a dishwasher. However, the developers didn’t manage to avoid accidents: the robot slipped on a banana skin.

Maybe this was what Google demanded from Boston Dynamics. A year after purchasing the company in 2013 the search company demanded to create a “customerized robot” able to work among people and perform basic tasks. Considering the fact that Boston Dynamics always focuses on scientific side of the project, neglecting business side, the company was on sale and it could be purchased by a Toyota Research Institute.  However, maybe the task to bring beer is rather consumerized.