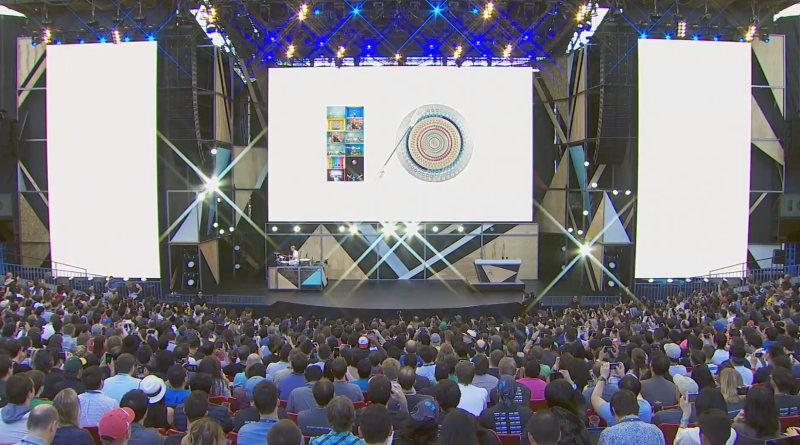 Google announced own version of a voice assistant called Google Assistant. In fact, it’s an advanced version of Google Now that allows users to ask questions and get answers right away. With Google Assistant you can find a nearby cinema, view a movie trailer or learn more about your favorite celebrity just by using voice commands. This virtual assistant understands context of a phrase being pronounced, is able to take part in a conversation and ask clarification questions.

Google introduced Google Home, a new smart dynamic and a competitor to Amazon Echo. The device is multifunctional and very stylish indeed. This smart dynamic is set to be put on sale in Q4 2016.

Using Google Home you can interact with Google Assistant by means of a built-in microphone. Also, the gadget can be easily connected to smart tech such as smart bulbs, cameras, thermostats and other devices and manage them remotely. Google Home can stream music from the Cloud and is enabled for syncing with other Google devices spread about the house. This allows for robust stereo effect in-house. Or you can play a track in a particular room to wake up your kids.

The gadget will be available to users in Q4 2016 and the price hasn’t been disclosed yet.

With an attempt to conquer a messengers niche, Google introduced two new applications for communication: smart messenger Allo and video messenger Duo. Both apps will be available on both iOS and Android in summer 2016.

With Allo, users will be able to exchange text messages and images. User’s phone number will be used as an identifier. Built-in Smart Reply feature allows for replying to messages without entering any words; Allo will analyze your previous replies and will use machine learning to learn how to make relevant suggestions over time. Allo syncs with Google Assistant and offers extended functions for global search, navigation, YouTube, Google Translate, etc.

Allo features an Incognito mode; once enabled, all messages get encrypted, which enhances security of communication.

Duo enables video calls and makes them happen even when the internet connection is poor. Video calls have a 720p resolution and Duo uses your phone number as an identifier.

The app’s interface is hidden during a call, and a Knock Knock feature demonstrates a preliminary version of a caller’s video before the interlocutor responds to your call. Duo is also enabled for calls encryption.

Traditionally, Google doesn’t disclose the name of its new operating system before its official release. However, this year the company has used the following trick: it suggested that users create a name for their new OS and submit their versions to a special website. The company has either run out of ideas or decided to increase user loyalty in such a smart way.

Let’s review some new features and improvements in Android N (that are as many as 250!) that’s set for final release at the end of summer 2016. By the way, Android N beta is already available for Nexus devices and a Pixel C tablet.

Google developers promise that Android N will be 75% as more speedy as the previous version. Besides this, they were able to decrease space required for apps installation. Also, some changes were made to graphics: Android N supports API Vulkan which promises improved graphics while providing higher energy efficiency.

Multitask menu has been optimized, too. In N, it’ll be limited to 7 last used apps only. Responding to numerous user requests, Google has finally added a Clear All button to export all of the active apps at once.

Apps security system SafetyNet will monitor apps on a device and compare them to the original apps in Google Play. If an app performs in a weird way, the system will block and delete it from a smartphone right away.

Besides a virtual environment to be factored to Android N, Google announced a VR controller and new VR glasses and promised absolute immersion without having to connect any additional gadgets such as Oculus Rift or HTC Vive.

Also, Android Wear apps can now work without a smartphone and are equipped with smart replies which facilitate gadget’s responsiveness to notifications. It’s another feature that became possible due to machine learning. Also, by the end of 2016 Google is planning to release Android Instant Apps that will allow users to use apps without downloading and installing them to a device.

Google has updated its Android Wear platform that was launched 2 years ago. Android Wear 2.0 is considered to be the most powerful system upgrade since the inception of Android.

At the moment, this version is available to application developers only and us set to go mainstream in Q4 2016.

One more innovation presented at Google I/O 2016 is Android Instant App technology that enables apps to run without being installed to a smartphone.

For instance, you can use Instant App to pay a parking fee without using a mobile website or installing an app. Instant apps are cached for several hours, but don’t display on a homescreen.

The technology is based on the existing mobile app. “It’s the same Android API, the same source code and the same project,” said Google Product Manager Michael Siliski. “In reality, it’ll take developers less than a day to start working with Instant App.”

For this to happen, they’ll have to split an app into several modules, each no more than 4 MB in size,  so that user can only download an app they really need. The goal is to launch a module at the time that’s comparable with a web page load time. It works on all OS versions starting with Android Jelly Bean, but modules should be permitted by Android Marshmallow or Android N. The chunks of the application will have access to the entire device functionality such as Google Wallet.