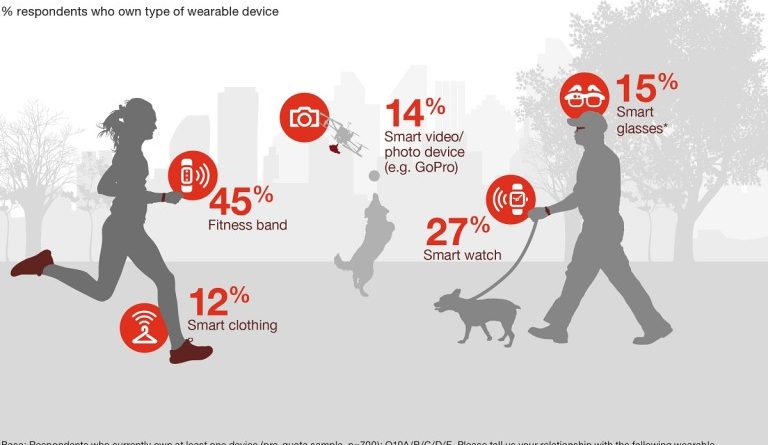 The usage of wearable devices has become tremendously popular among U.S. citizens, rising from 21% in 2014 up to 49% in 2016 according to the survey report made by consulting company PwC.

Besides, as a rule people have more than one device: approximately 36 % respondents of the survey confirmed this fact.

The company’s survey «The Wearable Life: Connected Living in a Wearable World» followed the survey of 2014 and was an advanced version of it. The PwC carried out the survey in order to understand the landscape of wearable technology and to identify its trends and opportunities.

1,000 U.S. consumers filled a questionnaire to get the data for the survey. However, the results showed that “the 49% of respondents saying they own a wearable could be slightly mistaken: notwithstanding provided definition, many consumers considered smartphones wearable devices”.

The major reason for buying these devices is to improve health (which seems obvious). Wearable technology devices include fitness trackers/bands, smart glasses, smart watches, smart clothing, and other wearables. The most popular devices are Fitbit, Google Glass, GoPro, and Apple Watch, etc., however, the range is not limited to the listed above.

Both men and women like their wearables; however, men are more likely to buy smart watches and smart glasses. And it is not a surprise, that millennium generation is more likely to possess wearables than older generation does. Usage of wearables declines with age, the PwC’s report said.

The report noted that consumers aged 35 to 49 are most likely to own smart watches.