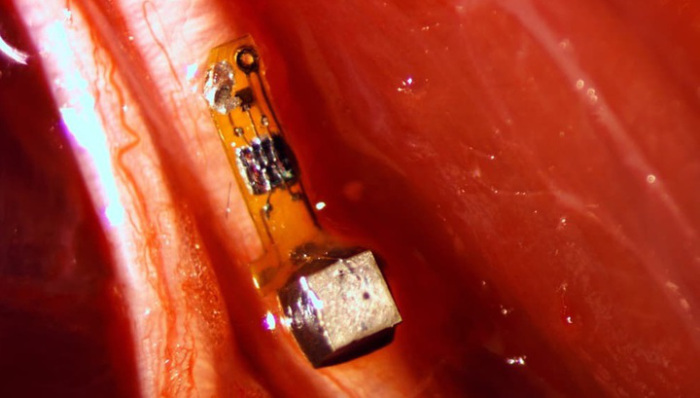 Engineers from University of California, Berkeley presented an innovative sensor smaller than one cubic centimeter. The device is able to track in real time the slightest neural signals that creates a wide range of possibilities for controlling human organs, organism systems and even prostheses.

The sensor uses ultrasound for charging and reading its measurements. This solution managed to meet several needs at once. This kind of waves unlike radio waves can reach any part of the body that why scientists mentioned that they are so universal.

The sensor contains a piezoelectric crystal that converts ultrasound waves into electricity supplying the energy for a transistor connected with a nerve or muscle fibre.

According to the developers, modern implantable electrodes have a range of disadvantages: they can break down very easily, need a complicated wire system to link them up and what is worse, they can carry the infection in the organism.  Furthermore, the development of different technologies is so rapid nowadays, so in a year or two these sensors will be out of date again. New tiny sensors can solve most of these problems.

One of the sensors’ developers, a neurophysiologist Jose Carmena highlighted that sensors can be applied for many purposes. “If a person is paralyzed, they can control a computer or a robotized hand, the only thing the person need to do is to have  this sensor implanted in the brain and it will operate for the rest of patient’s life. The sensors can also be used to control urinary bladder or to suppress the appetite”, says the scientist.

The first experiments were  carried out on rats: micro sensors were placed into peripheral nerves. Special rucksacks were designed for rats to carry ultrasound transmitters, recording the data from implanted sensors. What emerged was astonishing: scientists found out that the range of sensors’ functions can be expanded, for instance, they can be used to stimulate immune system and reduce inflammation processes. Also due to the possibility to influence nerves directly, they can be used for treatment of such neurologic disorders as epilepsy.

The work at the project has not been finished yet. Scientists believe that they will manage to do the sensors even smaller, they say that sensors can be twice less thinner than a human hair. In addition,  scientists have to modify a surface transmitter used for sending and receiving the ultrasound waves, discover new biocompatible materials.

Another perspective is to expand possible functions of a sensor, making it able to receive  non-electric signals, for instance, recognize when the oxygen and hormone level changes.

You can find a detailed description of the experiment in a scientific magazine Neuron.