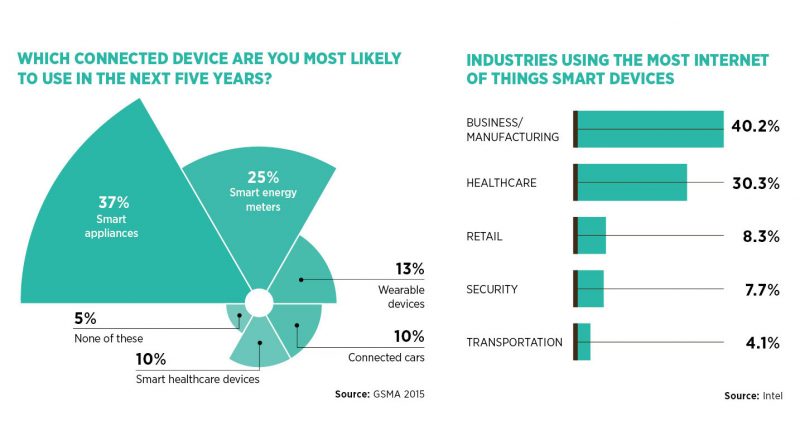 IoT technologies are rapidly developing and drawing humanity to a new, fully automatized and robotic era. Software Focus is keeping track of new discoveries and developments in the IoT sphere and sharing our most interesting findings with you.

The Button is connected with Wi-Fi and is set up and configured via Amazon mobile app.

American company Clear Channel Outdoor has introduced a new location tracking service in order to provide only most relevant ads to users. The system is called Radar. It identifies, segments and then targets the audience, taking into account their online activity information. The system also analyzes seasonal, temporal and weather conditions, and, as a result, shows the relevant advertisement.

Radar will collect mobile data of Clear Channel’s cellular service partners (including AT&T). It has become quite a matter of concern for personal privacy advocates. Though all the information is aggregated and submitted anonymously, there are still lively debates as to whether the application of such systems is ethical.

Interface that lets you control IoT devices with your thoughts

Researchers from the Brown University have joined forces with Blackrock Microsystems to create an interface that will allow us to control our connected / IoT devices with our minds. It will give paralysed and quadriplegic people the power to control TVs, computers and wheelchairs. The device will also make it possible to run all IoT devices, whether at home or at work. It will enable us to control driverless cars or even communicate with each other worldwide. The company is waiting for the US government’s approval to launch. Afterwards, the device will be tested on volunteers.

Samsung is developing a new OS for IoT

As an active contributor to the IoT development, Samsung is going to launch a new OS that will enable connectivity and interoperability between the IoT devices. This OS will be open-source, which will allow Samsung to enlarge its footprint in the IoT market. It will help devices perform simple tasks quickly and without human intervention. For example, there will be an OS to open door lock or turn the lights on as a user is approaching home. More detailed information on the subject will be provided at the developer conference in San Francisco next month.

Vodafone has just entered into partnership with Philips Lighting to combine an Internet of Things network with an integrated LED street light management system. This will make possible to reduce energy use by 70% around the globe.

Every street lamp in cities using the system will be fitted with a Vodafone M2M SIM and a range of Philips Lighting CityTouch LED systems.

Vodafone connects the machine-to-machine network (M2M) SIM cards with sensors and LED street light management system of lighting engineering companies, creating a flexible citywide infrastructure, which allows engineers to monitor and control the lighting and its output. The system CityTouch has already been established in Los-Angeles, London and Buenos Aires.

Separate Frequencies To Be Appropriated for the IoT Services in Britain

The UK communications regulator Ofcom is planning to introduce a new class of radio frequency licenses especially for the Internet of Things (IoT) and connectivity between machines (machine-to-machine). Ofcom has published a project, offering spectrum within the 55-68 MHz, 70.5-71.5 MHz and 80-81.5 MHz bands to be used for the Internet of Things, starting from September.

Mozilla has also decided to penetrate the IoT market and launched four projects aiming for further development and testing: Link is a personal user agent for the smart home, ensuring an automatic connection of the inmates to the home appliances in a secure environment and helping to change the device settings.

Vaani is a voice interface for IoT developed to easily interact with connected devices. Smart Home provides the connection between completely boxed home solutions like Apple Homekit and DIY solutions, including the one based on Raspberry Pi. In addition, probably the most interesting one is Sensor Web, a pilot project for crowdsourcing a pm2.5 sensor network. Everyone will be able to create his own sensor network and to make it available for anyone willing to access (it may be used in real-time monitoring of air quality of a neighboring street, or the current wait time at a favorite café).

BMW is working on building a system that would enable interoperability between a smart house and a connected car. It encompasses features such as a morning briefing by means of a holographic smart device, a weather forecast, route guidance and morning appointments on the commute to work. It also allows choosing one of the several connected BMW vehicles. The platform is called BMW Connected and based on Microsoft Azure. The first version of the app is already available for download, although only for iPhone owners.

The company already offers a range of smart devices such as air purifier, water purifier, blood pressure monitor and fitness tracker. A new device Xiaomi has just introduced scans the barcode on the rice packages, detects the type of rice, its producer and brand. Based on it, this smart home appliance cooks rice adjusting its heating methods according to the type of rice. Currently, the app can identify over 200 brands of rice, and that library keeps expanding.

The rice cooker can also be set to make pies and other food, but rice, cooked in this device, is impeccable. As you see, it can be of some use for you.

A Breakthrough in Air Trafficking Control

When the plane flies over the ocean, the limitations of a traditional radar and other air traffic surveillance systems become apparent. Ground-based systems have a range of about 200 miles, leaving large gaps in surveillance coverage all over the world.

Canadian civil air navigation services provider NAV CANADA is determined to arrive at a solution of these problems. For that reason, they have created a highly accurate ADS-B system in 2009. Currently, in collaboration with Iridium Communications, they plan an overall renovation of the existing system. Jointly the organizations formed a new venture called Aireon.

This year, Aireon is installing ADS-B sensors on each satellite to monitor the air traffic control systems around the world. ADS-B sensors are now broadly employed and many commercial aircrafts are already equipped with ADS-B avionics. The company is working to ensure that the location of every plane can be monitored in the real time, no matter where it is flying.

And when it comes to the larger impact of the ADS-B system, monitoring is just the beginning. Extending the Internet of Things (IoT) to track planes opens up new opportunities for aviation companies.