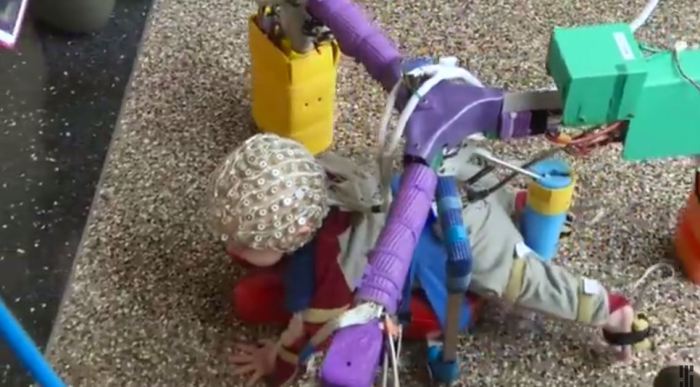 Researchers from the University of Oklahoma developed a prototype of an unusual robot aimed at helping infants with infantile cerebral paralysis (ICP) risk.

The mechanism called SIPPC, devised by American scientists facilitates the development of motor and cognitive skills of infants that due to different reasons may be in ICP risk group.

For successful prevention of this disease, it is necessary to diagnose it as soon as possible. The appropriate diagnostic method that enables to diagnose ICP for children aged 2-8 was developed by one of the project participants Tubi Colobe.

When a child shows the first signs of ICP, it stops trying to perform some special notions typical for its peers (for example, to crawl), and its brain stops acquiring new motor skills as well as cognitive skills. This can be explained by the fact that at this stage of exploring the surrounding world different links, mechanisms of spatial thinking and problem solving are formed in the brain. The usage of SIPPC robot helps infants to learn necessary notions and in such a way, their brains continues to develop.

The device equipped with 3 wheels uses a range of different sensors and cameras with the help of which the robot creates 3D picture of infant’s movements in a special cradle. At the same time the algorithm based on machine learning principles, in real time predicts new movements and gives the tip to move in the necessary direction.  SIPPC also makes electroencephalogram on the fly, noticing changes in infant brain activity.

A range of conducted experiments showed promising results and now the developers are working with 56 children (this experiment will carry on for several months). However, the scientists admit that the project is still in the early stage of its development, they have to perform a lot of work before its practical domiciliary application.